<Back to News
Dr. Nickel elected to The Hemingway Foundation and Society 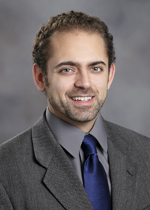 Matthew Nickel, Ph.D., assistant professor of English at Misericordia University, has been named to a three-year term on the board of directors of The Hemingway Foundation and Society. The international organization is the largest single-author society in the world and has nearly 1,000 members dedicated to advancing the scholarship and studies related to the works and life of the late author.

Dr. Nickel has dedicated much of his scholarly research and teaching to the study of Hemingway. His expertise was recognized when he was selected to co-direct The Hemingway Society's 2018 biennial conference, along with H.R. Stoneback, Ph.D., the world's leading scholar on Hemingway. Dr. Stoneback is a mentor to Dr. Nickel and lectured at Misericordia in 2014. The 2018 conference, held at the Sorbonne, the American University of Paris, the American Library of Paris and the Eiffel Tower in Paris, was the largest gathering of Hemingway scholars in history. It included more than 530 people from more than 25 countries. Misericordia had seven students, seven faculty members, and two alumnae present research related to Hemingway at the conference.

Dr. Nickel's doctoral thesis examined the influence of Catholicism on Hemingway's life. He has traveled extensively to sites frequented by the enigmatic author, including Italy, Spain, France, Kansas City, Missouri and Key West, Florida. His research is the focus of his 2013 book, "Hemingway's Dark Night: Catholic Influences and Intertextualities in the Work of Ernest Hemingway," that includes a forward written by Dr. Stoneback.

The Hemingway Foundation and Society is a single unit today and publishes the scholarly journal, The Hemingway Review, twice a year. It specializes in researched scholarship on the work and life of the famous author. The organization also oversees publication of The Hemingway Letters Project, a comprehensive scholarly edition of the author's letters. Cambridge University Press is publishing the projected 17 volume series.

For more information about the Department of English at Misericordia University, please call (570) 674-6400 or visit www.misericordia.edu/English.