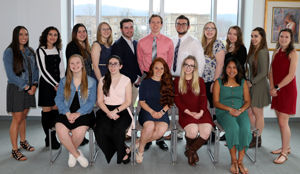 TriBeta was founded in 1922 for students dedicated to improving the understanding and appreciation of biological study and extending boundaries of human knowledge through scientific research. Since it was established, more than 200,000 people have been accepted into lifetime membership and more than 626 chapters have been established on the campuses of colleges and universities throughout the United States and Puerto Rico.

Misericordia University students majoring in biology are eligible for the TriBeta Biological Honor Society after completing at least three semesters in the program and maintaining a minimum overall grade point average (GPA) of 3.2 for associate members and 3.5 GPA for regular members.

For more information about the Department of Biology at Misericordia University, please call 570-674-6400 or visit www.misericordia.edu/biology.