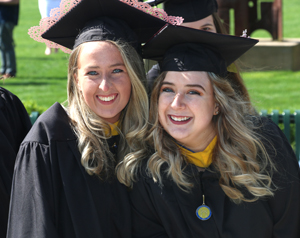 Tanya M. Trippett, M.D., a pediatric hematologic oncologist at Memorial Sloan Kettering Cancer Center, has spent the majority of her medical career fighting a silent killer â cancer â that knows no boundaries or limitations in affecting the quality of people's lives.

An acknowledged life-long learner, Dr. Trippett has treated countless children during a career that spans nearly 30 years. During that time "caring for numerous beautiful individuals,'' she learned "what it means to be courageous, resilient and valiant amidst adversity.'' She shared those lessons and others from her life and time as a teacher and student during the 93rd annual spring commencement ceremony for undergraduate students at Misericordia University.

"I look out at all of you and see the hope for a bright future,'' said Dr. Trippett, who specializes in lymphomas and clinical research to design and assess investigational therapies for children with all types of cancers. "We need a new generation of leaders who have not only completed the rigors of academic studies and excelled, but have been dually trained in the core values of life. 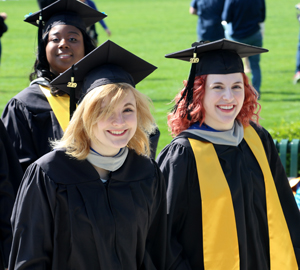 "You were meant for this time: A time when the world is starved for compassion and mercy; a time when peacemakers are the negotiators in a world of division; a time when the champions of justice are transformed through identification with the injustices of the weak and vulnerable of society.

"You are the next generation of leaders,'' added Dr. Trippett, who was the co-founder and served as the director of the Pediatric Oncology Experimental Therapeutics Investigator Consortium and is now building an international children's cancer research center in Ghana, Africa.

What advice did she give graduates to accomplish these noble goals? Her four lessons began with the simple message of remaining "true to yourself'' after quoting noted theologian and philosopher Howard Thurman.

"I have been impressed with how your generation has risen to the occasion to embrace truth,'' said Dr. Trippett, whose background includes molecular pharmacology and therapeutics laboratory research. "You have exhibited the courage to speak truth to power and as a result are revitalizing the moral compass of our communities, our nation and our world, when others more senior have failed.''

She followed that life lesson by urging her audience to "let mercy guide your service to others" because every life is precious, and suggested, "widen the lens with which you view life and God." 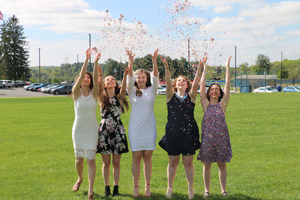 "Children experiencing cancer have incredible innocence and naturally reach out to others, and thus draw many diverse people to them,'' Dr. Trippett said, drawing on her life experiences again. "When present at the transition of a child's life from this life to the next, I have noticed one common occurrence: people from all walks of life who do not typically interact with one another â family, friends, doctors, nurses, security guards, janitors, play therapists â come together to celebrate the child's life and the end result is always peace. This is a divine quality.''

For her fourth and final lesson, Dr. Trippett's advice was more nebulous, drawing from her own career path in which "God's penmanship'' wrote her life's script in medicine. "The problems in this world may seem too large for one person to tackle,'' she admitted, before adding a burgeoning example: "Building an international cancer center for children in Ghana may seem impossible, but God has revealed this. 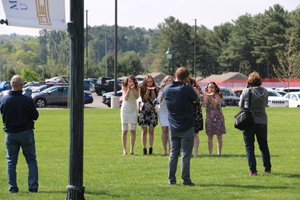 "You may be one person, but by using your voice will draw other likeminded people to join with you in one collective voice and through this alliance a force is created to accomplish that which the world says is impossible,'' Dr. Trippett added.

Dr. Trippett said in closing, "Use your mind and allow your heart, your voice, your hands, and your service to be a gift to the world and a catalyst for change. Speak with a collective voice and act with the force of many. This is what God created you to do.''

Student speaker Brianna Spilsbury of Pittsburgh, Pa., opened her address by quoting famous TV personality Ellen DeGeneres: "Follow your passion, stay true to yourself, never follow someone else's path unless you are in the woods and you are lost and see a path then by all means you should follow it.''

The exact path one follows in college, she acknowledge, is not clear for everyone. And that unknown enables students to unlock their directions, talents and more that otherwise may have gone unfulfilled. 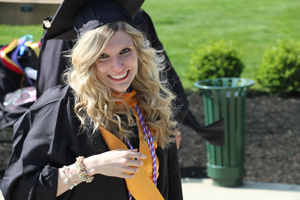 "The beauty of creating our path here was not following the same path we initially started on, but instead valuing the accomplishments and challenges that built our path along the way,'' she added. 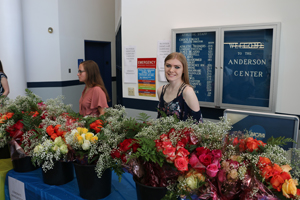 Misericordia University commencement events included separate ceremonies for the graduate and undergraduate degree recipients. The Most Reverend Joseph C. Bambera, D.D., J.C.L., Bishop, Diocese of Scranton, delivered the Benediction for the undergraduate ceremony, while Monsignor John Bendik offered the Benediction at the graduate degree ceremony. David B. Rehm, Ph.D., vice president of academic affairs, presented the candidates for their degrees, and Thomas J. Botzman, Ph.D., president of Misericordia University, welcomed graduates and their guests to both ceremonies.

Brennan O'Donnell, Ph.D., the 19th president of Manhattan College, presented the keynote address at the graduate degree ceremony. A scholar, author, editor and expert on Catholic higher education, the Kingston, Pa., native recalled his formative years were punctuated with the influence of Mercy traditions thanks to his late mother, alumna Mary Patricia (Brennan) O'Donnell '39, his late maternal aunt, Sister Miriam R. Brennan '50, RSM, and Sisters of Mercy who regularly visited his homestead.

"(My mother) always sought to put her gifts â including the great gift of her Misericordian education â at the service of others, leading by example as she lived out her vocation,'' he said, addressing his mother's career in nursing as a senior nursing administrator at the former Nesbitt Hospital and his aunt's notable career as a Sister of Mercy and chief administrator at the former Mercy Hospitals in Wilkes-Barre and Scranton, Pa.

Sunday afternoon routines at the O'Donnell household, though, oftentimes included visits from Sister Regina Kelly '43, a beloved professor of English at Misericordia for nearly four decades, and other Sisters of Mercy from the Dallas Regional Community.

"I loved those days because, listening to their conversation and later, being invited into it, the Sisters always seemed to be bringing us news from another world â a world larger and more significant than the world of our daily lives,'' said President O'Donnell, who also served as dean for Fordham College at Rose Hill and as a professor and director of the university-wide honors program at Loyola University Maryland during his career in higher education. "Both always seemed so up to date on what we used to call in school 'current events.'"

Their connection to the world through faith, religious formation and international travel also revealed to President O'Donnell that there was something much larger than the earthly world. "I couldn't put my finger on it then, but what I was responding to was the way they spoke and, more importantly, the way they lived and worked with a firm sense that what they did always had a higher purpose,'' he said, about their purpose to serve God by serving others.

"They sought, in a word, not merely to be merciful, but to be the very embodiment of Mercy itself. Through their work at its best, they were responding to a call to become God's loving and merciful presence in a broken world,'' President O'Donnell added.

In closing, he acknowledged the appropriateness of using the historic archway as a "key symbol'' for Luzerne County's oldest four-year institution. "At a place like Misericordia, one enters through the arch not into an ivory tower, set off from the world, but into a microcosm of the world â a kind of scale model of its totality that allows students to approach it from as many different angles as possible,'' President O'Donnell said.

"Those angles are the various disciplines, from philosophy to physics to physical therapy, each of which focuses rigorously on a part in order to understand not only that part, but how it contributes to the whole â to the big picture which is, finally what we call reality â or the totality, in all its wonder and beauty, of the Creation.''

Misericordia University presented President O'Donnell and his wife, Angela Alaimo O'Donnell, Ph.D., with honorary Doctor of Humane Letters degrees during the graduate ceremony. Dr. Alaimo O'Donnell, a native of West Wyoming, Pa., and a Wyoming Area High School graduate, is an award-winning writer, a professor at Fordham University in New York City, and the associate director of Fordham's Curran Center for American Catholic Studies. During the ceremony, she presented the Invocation in the form of the poem, "Mercy on the Mountain,'' which she wrote for the Class of 2019.

"The poem is both a song and a prayer,'' Dr. Alaimo O'Donnell said, before reading it. "'Mercy on the Mountain' is set here, in the Back Mountain of Northeastern Pennsylvania, a place native to me. This poem is a celebration of the gifts that have been given to us by Misericordia University and by its founders, the Sisters of Mercy. It is also a celebration of you and the work this education has prepared you for.''

The Misericordia University Alumni Association presented Dr. Michael A. and Tina MacDowell with the Honorary Alumni Award during the graduate ceremony. The award honors individuals who are not graduates, yet have made significant contributions toward its welfare, reputation or prestige, and have shown lifelong devotion and demonstrative loyalty. Dr. MacDowell served as the 12th president of the university from 1998-2013.